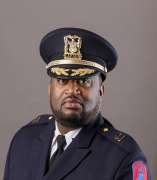 Captain Stan Grice is a United States Marine Corps veteran who served honorably from 1985 to 1989. Captain Grice began his career as a Police Officer for the Chicago Housing Authority Police Department in 1994. While there, he served in several different units of the department from patrol, tactical teams and special operations. Captain Grice has been employed with the University of Illinois at Chicago Police since 2001. As a police officer, he’s served in positions as a patrol officer, field training officer and detective. Once promoted, he has supervised and managed units from Investigations, Policing and Community Engagement Unit, Student Patrol, Technical Services, Professional Standards, Labor Relations, Police Telecommunications and Crime Statistic Unit. Since 2015, he has served as Commanding Officer of both Administrative and Support Divisions. Captain Grice currently the Commanding Officer of the Patrol Division and Special Operations Section.