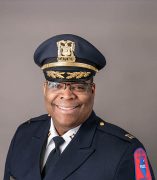 Captain Eric Hersey was born and raised in Chicago’s Englewood community. He began his police career in 1994 with the Chicago Housing Authority Police Department where he served in patrol, tactical units, supervised a special operations unit, and managed cases and developed intelligence in the Criminal Investigation Division. Captain Hersey has been employed with the University of Illinois at Chicago Police Department since 2000. UIC he’s served as a patrol officer, property control officer, patrol sergeant, community policing unit supervisor, and Watch Commander. As a Police Lieutenant, he served as the Support Services Lieutenant where he oversaw both the investigations unit and the police telecommunications unit and later served as the Lieutenant of Patrol. In his position on patrol, his duties include responsibility for operation and management of the division which includes 24-hour emergency and routine patrols, active shooter/attack response, campus emergency operations planning and management, as well as establishing organizational goals and objectives. Captain Hersey was promoted to Commander of Field Services supervising all operational aspects of the department. Captain Hersey is currently the Commanding Officer of the Medical Complex Operations and manages all special projects for the department. Captain Hersey is trained as a both a Weapons of Mass Destruction and Counterdrug Swat Operator and Commander. Captain Hersey is a U.S. Army retiree, having served two combat tours in Iraq where he received numerous awards and citations including the Bronze Star and the Combat Infantryman’s Badge.